Call for commitment to PCSOs as forces overwhelmed by Covid rules A £60 million funding boost for police and councils to deal with coronavirus lockdown rules would be better spent on long-term funding for PCSOs, according to Unison, the trade union which represents their interests nationally.

It has called for an increase in PCSO numbers to help deal with lockdown rules as forces struggle with increasing crime levels and fast changing regulations.

Unison’s national police and justice officer Ben Priestley said: “The role that PCSOs play has never been more relevant than it is now when the government has realised belatedly that they don't have the resources to enforce or encourage people to observe the Covid regulations.”

Earlier this month the government announced that the 43 police forces in England and Wales would receive an extra £30 million, divided up according to the existing funding formula, to deal with Covid restrictions.

This followed talks between the Home Office and senior officers asking for more money to cover Covid-19 restrictions as crime levels rose back towards those seen before lockdown.

The union believes the funding is an admission of the “short-sighted thinking” behind the decision to cut PCSO numbers in the first place.

Local authorities are also being given an extra £30 million to set up services including Covid marshals, which Mr Priestley said should have been provided to the police service.

“But it needs to be provided in in a lot more quantity to get this off the ground because £60m won't employ very many new PCSOs I'm afraid,” said Mr Priestley.

“Someone in central government has invented this idea of the COVID Marshal. Actually if they just looked around briefly, they would have realised that role already existed, and it's called a PCSO. And I think that’s what is infuriating for our members who work as PCSOs. Their role has, again, been overlooked.”

He said the government now wants a high profile, uniform patrol role that works in communities, has the trust of communities and works with businesses, schools and can “encourage”.

“That's the relationship that PCSOs have with their community. They are more in that role of giving advice, information, encouragement, rather than hard-edged enforcement,” said Mr Priestley.

“So it is an eye opener, frankly, on a world that has been created that we have been campaigning about since the cuts started in 2010 onwards, and hopefully ministers will get the message.”

While some forces have entirely abolished PCSOs, such as Norfolk, other chiefs and Police and Crime Commissioners have re-invested in them which Unison welcomes. But it says forces investing in PCSOs are “clearly in a minority”.

Mr Priestley said: “The impact of those cuts is that a uniformed police patrol role has been withdrawn from the streets of England and Wales. Simply that’s the reality of it.

“At a time when the need for the skills and expertise that those PCSOs can provide there are forces now still thinking about potentially making PCSOs redundant is a real travesty.”

Unison has articulated this to Home Office ministers, Treasury ministers, MPs, and has called on the Home Office to push for extra funding for PCSOs ahead of submitting its bid to the Treasury for the forthcoming comprehensive spending review.

On PCSO cuts, Mr Priestley said: “These are difficult decisions that chief constables and PCCs have to make in respect of how they divvy up limited budgets. And although police funding has increased over recent years, particularly in relation to the precept, that's not been enough, in many cases where forces are carrying pre-existing levels of debt and other unfunded commitments and they've had to make those difficult decisions.

“So at the end of the day, the blame for that must lie with central government," he said. "They need to provide sufficient funding for the entire police workforce to be supported, not just to recruit the replacement 20,000 police officers for those of the cut. That's important."

A Government spokesperson said: “We have been very clear that the Government is committed to giving the police the resources they need to keep the public safe. That is why we have provided an unprecedented package of support to councils through the pandemic, including for Covid marshals who are able to engage, explain and encourage best practice and ensure compliance with the rules.

“The employment of police staff and the way in which they are deployed is a local matter for police forces. We continue to work closely with police leaders to ensure they have the resources they need, giving policing the biggest funding increase in a decade of up to £1.1billion compared to 2019/20. In addition to this we are recruiting 20,000 additional officers over the next three years so people have an increased presence in their communities.”

Mr Priestley compared it to recruiting an additional 20,000 doctors in a hospital but not recruiting the nurses, porters, radiographers or physiotherapists.

“And what we now see in policing is that team effort that could have been put in place here, has been damaged by the cuts that have taken place, decreasing budgets over the last 10 years,” he said. 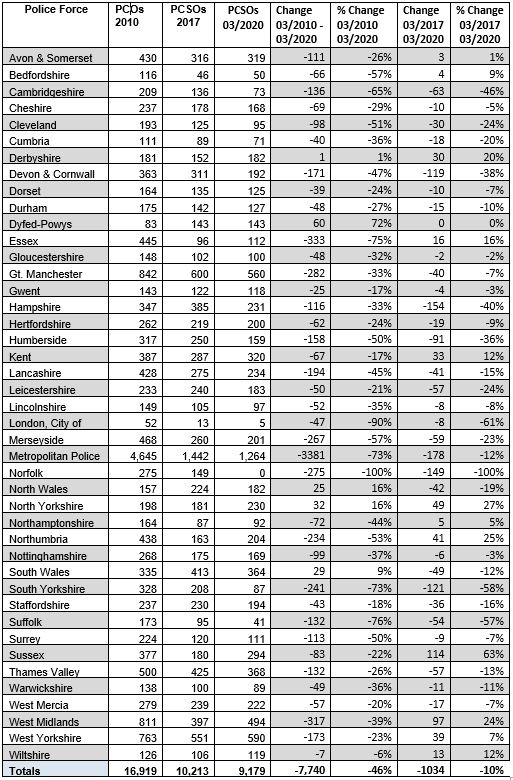