The 19 new officers are amongst the first nationally to undertake the intensive two-year Detective Constable Degree-Holder Entry Programme (DHEP) which offers specialist training in investigations.

The programme brings together practice and theory with "real world experience" in the workplace and learning based on the national curriculum which is assessed by university partners.

Alongside 28 new officers starting the Police Constable Degree Apprenticeship this week, the recruits were welcomed by Chief Constable Jo Shiner and PCC Katy Bourne at an attestation ceremony on Tuesday (29 September).

All the recruits, who are funded by both the Government’s national recruitment campaign and the local policing precept, will work alongside each other for the first 30 weeks. The trainee detectives will then specialise in investigations, working towards a Diploma in Professional Policing Practice and accreditation as a detective constable over the course of two years.

They will then join investigation teams or safeguarding units across Sussex.

Jo Shiner, Chief Constable said: “It was a pleasure to welcome these 47 new officers to the force and I am proud that Sussex Police – through collaboration with the University of Cumbria – is one of the first forces in the country to launch the new fast-track Detective Constable DHEP programme.

“Both this and our Police Constable Degree Apprenticeship offer new entry routes as officers, making a policing career more accessible for more people, ensuring we create a diverse workforce with the best range of skills, aptitudes and experience we need for 21st Century policing.”

“As crime and technology evolves, our need for investigative roles is greater and more important than it’s ever been, from tackling cyber crime and catching online sex offenders to disrupting serious organised crime and safeguarding vulnerable adults and children. As a result we’re investing in the recruitment and development of both detectives and investigators.

“We are taking significant steps internally to develop police officers and police staff into these roles; while this additional new fast-track programme for degree-holders will help us accelerate the development of the specialist trained officers we need to identify and pursue criminals using cutting edge technology as well as traditional skills." 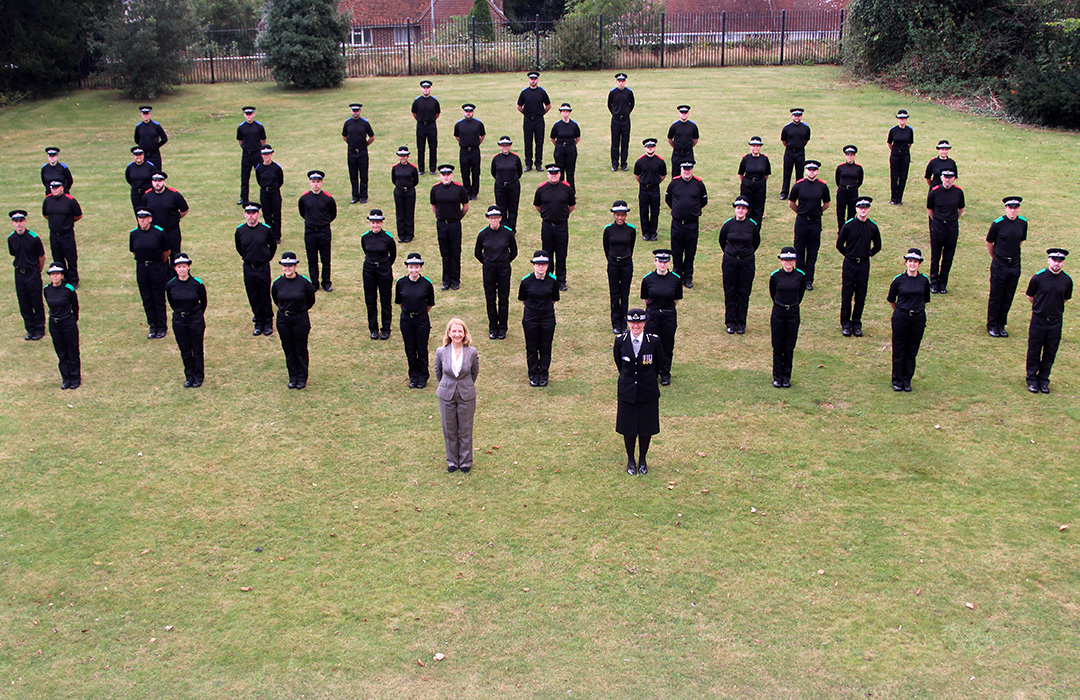 All 47 officers will be joining frontline response teams in December.

Sussex Police is one of three police forces introducing the new DC DHEP programme in recent weeks, the other two being Dorset and Devon & Cornwall.

PCC Katy Bourne said: “I’m delighted that Sussex Police is leading the way in forward-thinking recruitment - being one of the first forces to offer these new entry routes is a huge achievement.

“Chief Constable Shiner is preparing Sussex Police to take on any challenge within the ever-changing landscape of 21st century policing. Our new police constable recruits will work alongside the fast-tracked detectives, who will be rigorously trained for specialist investigative roles that will enable them to successfully address the toughest criminals.

“Seeing all 47 new officers sworn into Sussex Police and speaking to some of them after the attestation ceremony, it was clear that they are enthusiastic and eager to make a positive, lasting difference to our communities.”

PC Jaimine Shahid has just started the three year police constable degree apprenticeship: “Today is the biggest day of my life. I couldn’t be more proud of myself, all the hard work has paid off.

“I have always wanted to join the police and until recently was working as a police enquiry officer in Crawley.

“My goal is to show the community – especially the BAME community - that we are here to help. I want to help breakdown barriers and inspire other BAME individuals to join up.”

PC Laura Duke is another new recruit. After a career with the UK Border Agency in the Middle East, she volunteered for a domestic and sexual abuse charity for two years, offering support over the phone and in person.

She said: “It is incredibly exciting to be a part of the fast track detective route. This route appealed to me as it took into account my previous experience and the emotional resilience I’ve developed. As a working mother and at the age of 39, I have realised that it is possible to chase your dream career.”

Gary Slater, Principal Lecturer for Policing at University of Cumbria, said: “Together, we and our fellow universities in the Police Education Consortium, will educate more than 1,000 new police recruits in south east England over the next three years, helping to establish consistency in police training nationally and bring policing in line with professions such as nursing and teaching.”